House of the Virgin Mary Map And Location

Information About House of the Virgin Mary

House of the Virgin Mary is a Catholic and Muslim shrine located in Bülbüldağı in the vicinity of Ephesus. Selçuk is 7 km away. The house was discovered following the reported dreams of Blessed Anne Catherine Emmerich (1774-1824), a Roman Catholic priest in the 19th century. After the death of the Visions, he was assembled in the book of Clemens Brentano. The Catholic Church did not really comment on whether the house was a Virgin Mary, but since the house was discovered, it is now receiving regular pilgrimage visits. Anne Catherine Emmerich was blessed on October 3, 2004 by Pope John Paul II.

Catholic pilgrims visit Jesus's mother Mary, believing that she was brought to this stone house by St. John and that she lived in this house until the reception of the cennet (Assumption according to Catholic doctrine, Dormition according to Orthodox doctrine). This sanctuary was worthy of visits to various Papal States and the Blessed Sacrament of the Patriarchate. The first pilgrimage visit was made by Pope Leo XIII in 1896 and was most recently visited by Pope Benedict XVI in 2006. It is thought that the grave of Mary is also in Bülbüldağı.

There is a small Byzantine Church in the ruins of the Virgin Mary , which was passed by the upper door of the ancient city of Ephesus. Here it is believed that Mary, the mother of the Prophet, lived and died. In addition to Christians, Muslims are considered holy and visited, sickness is sought for healing, and vows are devoted.

The temple can be described as a modest place of worship, rather than great. Construction and protected stones go back to the Apostolic Period, consistent with other buildings that have been preserved since. Only small garden arrangements and extras for worship outside the building were made. At the entrance of the mausoleum they find a spacious room with a statue of the Holy Virgin Mary in the center and an altar on the other side. There is a smaller room on the right, traditionally believed to be the actual room the Virgin Mary slept in. It is believed that in the room where the Virgin Mary sleeps and rests in the tradition, there is a kind of channel where there is a running water that flows out to the fountain.

Apart from the Mabed, the wanderer has a kind of wish-wall that they attach to their personal intent with paper or cloth. There are additional lights outside the mosque so that a variety of fruit trees, flowers and the house can be better observed around. Some also have a kind of fountain or well that they believe is exceptional fertility and healing power.

House of the Virgin Mary ephesus izmir selçuk turkey, history, photograph,information about, where? map, how can i go? places to visit, places to go. historical places, old buildings. old cities.Chapel at pilgrimage site said to be the former home of the Virgin Mary after the death of Jesus. 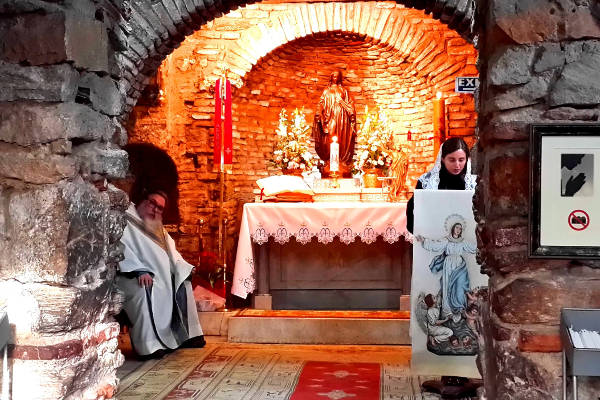 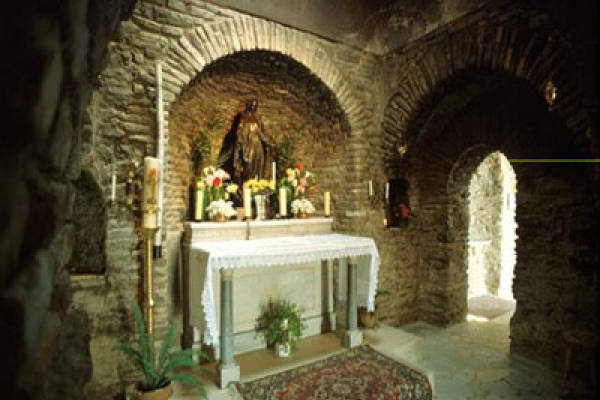