Tokat Museum; It is a museum founded in Tokat and exhibited 36253 works as of 2007. It is located next to Takyeciler Mosque in Sulusokak.

The museum started to work in 1926, opened to the public in 1982, and in 2005 the exhibition was arranged. Gök Madrasa, used as a museum building, III. It was built in 1277 by Pervane Muineddin, the vizier of Gıyaseddin Keyhüsrev.

The museum is divided into two sections where archeological and ethnographic works are exhibited. The museum, which hosts a large collection of coins, is open to visitors every day from 08.00 to 17.00 except Monday.

Bedesten
It has been used as Bedasten Tokat Museum since May 2012. Bedesten is located in the famous Sulusokak in Tokat, east of the Takyeciler Mosque. Evliya Çelebi described this bedesten in his famous Travel Book as "it was established in a very organized way like the bazaars of Aleppo and Bursa". Arastalı Bedesten is reminiscent of the Bedesten section of the Istanbul Grand Bazaar. Arastalı Bedesten, which is an architectural work worth seeing, is built of fine mortar and its masters are highly advanced in its vaults. An interstate was added to the east and west adjacent to the bedestan and an important building group was formed.

Tokat Writing
In the museum, there are examples of Tokat writing and expressions supported by visual elements about hand print technique.

Roman Tombs and Sarcophagi
There are Roman sarcophagi in the museum. In addition, Roman Emperor Julius Caesar's famous "Veni Vidi Vici" (allegedly said when he conquered Zile) and the related war is presented to visitors with various information visuals. 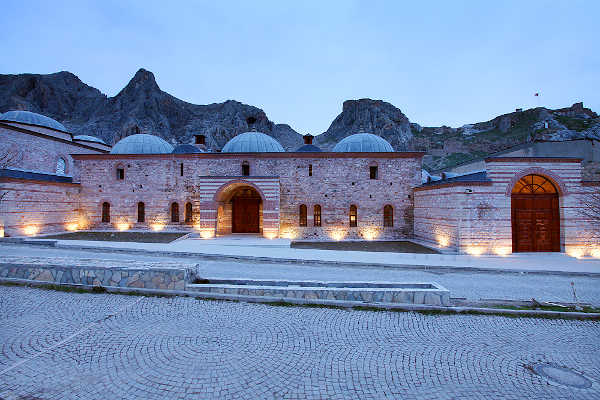