Edirne Palace or Saray-ı Cedid-i Amire (New Palace) is one of the Ottoman palaces in Edirne. It was the largest palace of the Ottoman Empire after the Topkapi Palace in Istanbul. Only a very small part has survived.

Outside the city center in the north of the west of the Tunca river in a very large hunting grounds and forest, the palace, was established on a land of about 3 million square meters. It consisted of 5 main squares and the buildings within this square. There was a palace garden inside. The Sarayiçi region, where the palace was located in the past, is the area where Kırkpınar wrestling is held today.

In 2008, work was initiated for the restoration of Edirne Palace.
Some Palace Structures
Cihannüma (Has Oda) Summer Palace
The Cihannuma Pavilion is the most magnificent structure of Edirne Palace. It was built in 1452 by Fatih Sultan Mehmet. On the top floor there was an octagonal room with a pool. This place, where Cem Sultan was born, is among the ruined buildings to date.

Sand Pavilion
The Sand Pavilion is an important building located on the right side of the Cihannuma Pavilion in Edirne Palace. It is said to have taken its name from its yellow sand. It was built during the reign of Fatih. The adjacent Kum Kasrı Bath is one of the palace structures that can survive to the present day.

Palace Garden
Only 58 hectares of the so-called 'Chicken Forest' remain from the Palace Garden in Edirne Palace. Chicken Forest is an area full of herbaceous onions and valuable medicinal plants. IV. A small attachment of the hunting mansion, “Bülbül Pavilion”, built by Mehmet in 1671, is still standing today.

According to a myth in the area called Chicken Forest today, chicken was raised in the past and the egg whites obtained from these chickens were mixed into horasan mortar and chicken meat was sent to military regions. 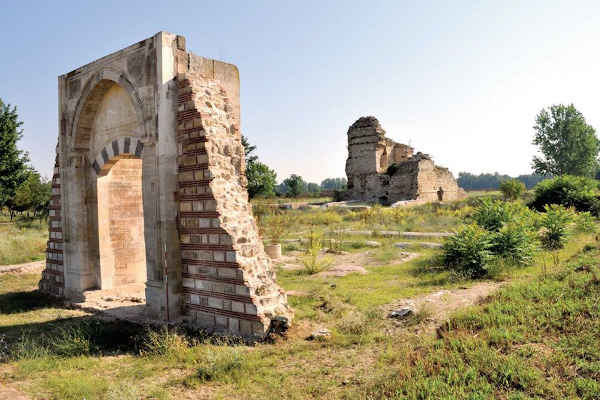