The Ancient City of Laodicea Map And Location

Information About The Ancient City of Laodicea

Laodikeia was one of the cities of Anatolia in the 1st century BC. The ancient city of Laodicea, located 6 km north of Denizli, is located at a very convenient point in the geography and south of the Lykos river. The name of the city is mostly referred to as “Laodikeia on the coast of Lykos geçmek. According to other ancient sources, the city was built between the years of 261-263 BC. It was founded by Antiokhos and named after Laodike, the wife of Antiochus. The great works of art in the city are thought to belong to the 1st century BC. The Romans also gave special importance to Laodikeia and made the center of the Convent of Kıbyra (Gölhisar-Horzum). A series of high quality coins were printed in Laodicea in the time of the Emperor Caracalla in Laodikeia. Many monumental buildings were built in the city with the contributions of the people of Laodicea. The presence of one of the seven famous churches of Asia Minor in this city shows how important Christianity is here. A very large earthquake occurred in the 60 AD.

According to Strabo, Leodikya was breeding a kind of sheep, famous for the smoothness of the raven black wool. The author also mentions that these animals provide great income to the Leodis. The city has also developed a well-known textile industry. It is mentioned in the diocletian edict of a kind of fabric called "Laodicean". The tunnels known as "Trimita" were so famous that the city was known as "Trimitaria". Excavations at Leodikya were conducted by the professors of the University of Quebec Laval, Canada between 1961-1963, under the direction of Professor Jean des Gagniers, and a very interesting fountain structure was completely revealed. These successful studies have been published, in particular, with a section on the fountain structure, covering very good studies.

On the northeast side of the ancient city, the Roman theater was constructed in accordance with the Greek theater type. The scene has been completely demolished and the cavea and orchestra are quite intact. About 20,000 people.

It is located 300 meters northwest of the big theater. It was built in Roman style according to the Greek theater type. The scene has been completely demolished and the cavea and orchestra are also disturbed. It can accommodate about 15,000 people.

It extends in the east-west direction to the southwest of the city. The additional structures of the stadium and the gymnasium were constructed as a whole. The length of the stadium made in AD 79 is 350 meters and its width is 60 meters. The structure, which was built in the form of amphitheater, has 24 rows of seats. The large part has been destroyed. In the 2nd century AD the inscription found that the gymnasium was built by Proconsul Gargilius Antioius and dedicated to the Emperor Hadrian and his wife Sabina.

It is located on the corner of the main street of the city and the middle street. The structure of the Roman period. There are two sides of the pool and niches. It was repaired in Byzantine time.

The monumental fountain was excavated by French archaeologists on behalf of Canada Québec University between 1961 and 1963. Cesme is located on the corner of the street that stretches towards the stadiums and cuts in the southwest direction. There is a square pool on the corner and two niches, one on the north and the other on the west. Water was brought from the second main distribution terminal to the fountain by means of two pipes. The fountain was built in honor of the Roman Emperor Caracalla (c. 211-217) to visit Laodicea in 215 AD, and then spent four repairs one after the other. The most recent repair was made at the beginning of the 5th century AD. Then the fountain structure was converted into a baptistery. The guardrail walls of the pool are decorated with reliefs of these mythological subjects such as the killing of theseus by Minatauros, and the kidnapping of Zeus by Ganimedes. In the area where the fountain structure is located, the architectural pieces such as architrave, architrave-frieze blocks, cantilevered geison, posterior Attic Ionic pedestals, burma ribbed column pieces and embossed ceiling cassettes are found intensively. It is possible to see the construction stages of the fountain in these architectural reliefs.
Parliament building

Located on the north side of the stadium. There are some rows of seats that are destroyed. The building, which was built in the 2nd century AD, is made of travertine and marble blocks adjacent to the Southern Agora at the front. It is possible to see architectural components such as headboards, columns, postaments, architrave-frieze blocks, ranke-decorated blocks, and geodeses of the building, made of marble on the surface. There is also a round structure that can be Prythaneion on the east side of the Assembly Building. It is possible to see architectural pieces such as postament, architrave-frieze blocks and geison.

The foundations of a temple are located on the north side of the Colonnaded Main Street with its courtyard. The rectangular temple (sacred courtyard) is entered into the colonnaded street. The postaments around the courtyard belong to the porticoes that translate three sides of the temple sanctuary. In the northern part of the sacred courtyard is the south facing temple. Probably, only the foundations of the temple of prostylos planned. On the façade, the facade of the Attic-Ionic column pedestals made of marble, the burial and grooved column pieces, embossed architraves and superstructure elements such as geison are seen. In the Corinthian order in the same area, the column cap and corner cap parts show that the structure is in the Corinthian order. The majority of the architectural blocks of the temple were moved to be used in other buildings near the end of the 4th century AD. Some of the relevant blocks were uncovered during the excavations in Syria Street.

We learn from the written documents that the title of La Laodikewn Newkorwn ew, odik Laodikeon Neocoron - Temple Protector ac was given to Laodikeia during the reign of Emperor Commodus (180-192 AD) and Caracalla (211-217 AD). So far, we have supported the ideas that this structure described above can be Sebasteion. Existing architectural remains of the late 2nd century AD-3. It can be dated to the beginning of the century.

It is adjacent to the street south of the colonnaded street. Only a portion of the carrier remains standing. The main entrance is west.

Lykos, The Ancient City of Laodicea Denizli  turkey, history ,information about, where? how can i go? places to visit, places to go. historical places, old cities. Directions,Location,Map,tourist map. 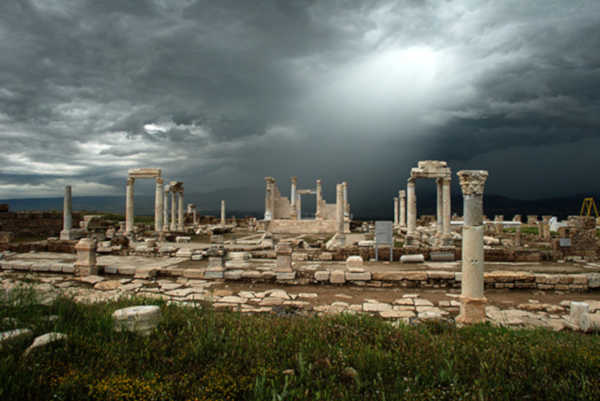