Roman Baths of Ankara is located on the Çankırı Street, which extends from the Ulus Square of the Altındağ district of Ankara to Yıldırım Beyazit Square. It was built by the Roman Emperor Caracalla, son of Septimius Severus in the 3rd century, in the name of the god of health Asclepius. The financial support was provided by Tiberius Iulius Iustinianus, one of the richest in the city. Today, the Roman Bath was a mound of this platform, at the top of the Roman Period (Partially Byzantine and Seljuk floors), under the Phrygian Period settlement was found in the ruins.

Since the stone remains under the mound are very well preserved, the plan of the building is understandable. According to this, it is understood that the building was built by Empire standards rather than a provincial city bath.

Bathhouse 80 x 130 m. size, made of stone and brick. With the entrance on Çankırı Street, a large area surrounded by a columned portico ruin and called Palaestra physical education and wrestling is entered into the place. There are four rounded and rounded columns on the right side of this section.

Just behind the sports area is the phirigidarium, the left is the piscina (swimming pool) with sitting steps on the sides and the apoditarium (cold place), and the coldness with column pieces made of round bricks on the right. The second part of the tepidarium (part of the column) again features round bricks. The bathing rooms were on these columns. The caldarium (temperature) is located at the back of the bath and there are 12 ashes.

The reason why warm and warm parts are wider than other sections should be connected to very cold winter conditions of Ankara. These are supported by an underground heating system consisting of brick columns around which warm air from the furnace flows freely, and the rooms above were heated in this way.

VII. It is understood that the structure, which was destroyed by a fire in the 19th century, was used from the coins uncovered during the excavations for about five hundred years and was repaired from time to time.

The archaeological excavations carried out by the Turkish Historical Society between 1938 and 1943 revealed the bathing areas of the bathhouse, washing and washing areas and underground and service roads. 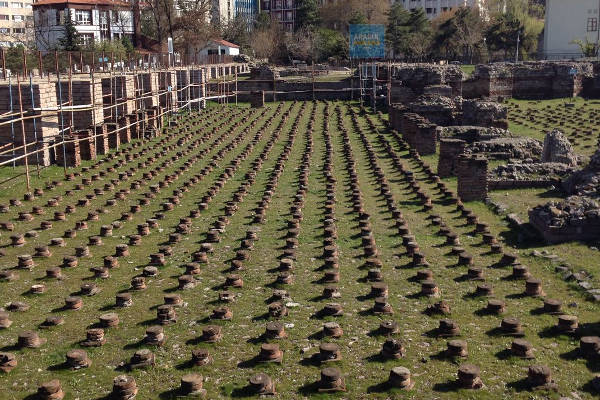