Rhodiapolis is located on the hill and its skirts 2.5 km north of Illi Kumluca District of Antalya. It is considered to be the foundation of the Rhodian colonial period due to its disadvantage. However, there is information that it has existed before. It was first discovered in 1892 by Austrian archaeologists. The most famous city of the city is Opramoas, the most famous euregetes (benevolent) who lived in the 2nd century AD and helped all the cities of Lycia.

B.C. In the year 500, Hekataios says it was founded by the Rhodians due to the name of the city. Theopompas Rhodiapolis from the Early Age writers asserted that after the Troia war, they were founded by Amaphilokhos, the leader of the Akhas. Amphilokhos was a priest at the same time and gave her the name of Rhodia.

The physician who lived in the 2nd century AD, Herakleitos established the cult of Asklepios in the city and received the title of the head priest and also built a Asklepeion. The excavated main road and the portico in front of Asklepeion were opened, the library and the temple were consoled and brought to a more meaningful shape for the partial repair and the sight. The Hellenistic theater with a restoration of the ancient city, the Hellenistic theater, was concluded on 22 June 2011 as a result of an organization organized in cooperation with the state, private sector and civil society.

The remains from the Classical Period to Byzantium are observed in the city. The city has its theater, bath, Opramoas monument, church, necropolis, and numerous water cisterns. The 12 emperor letters, 19 procurator letters and 33 memorandums written on the blocks of the Opramoas monument were destroyed by written monumental treasure hunters.

Also he lived in the time of Emperor Antoninus Pius and Opramoas's grave monument located in donations for the structuring of the Lycian city is in front of the theater. The inscription here is the longest inscription in all the Lycian territory. In this paper, the Emperor and of letters from governors, Opramoas presented honor awards, to their city and other Lycian no sign of the coming of its aid and present to the city, Fort, which was built in Rhodiapolis' and are mentioned Nemesis to be assigned temple. This grave monument is 7.6 x 6.7 m. It is made of well-worked square marble blocks. Today, however, all the stones of this monument are scattered around.

Rhodiapolis Ancient city Antalya Turkey. history, photograph,information about, where? map, how can i go? places to visit, places to go. historical places 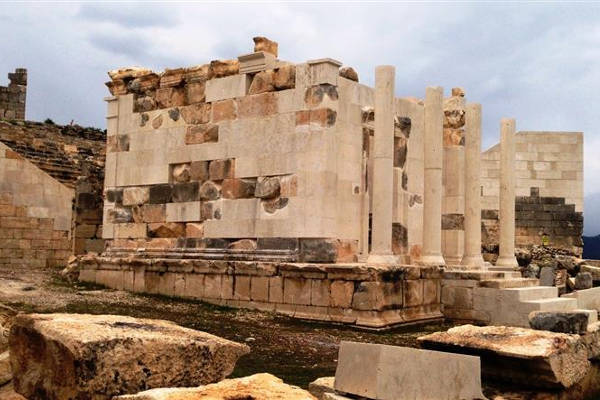