Olimpos or Olympos, which means "Ulu Mountain" in the old yin, is the ancient city which is known as Yanartaş. Today it is known that Olympos, which is known in the Lycian Union coins dating from 167-168 BC, 'is one of the 6 cities with three voting rights. He represented Lycia's east in the Union. Most of the city's day-to-day survivals are covered with trees and trees in the forest and belong to the Hellenistic and Roman Byzantine periods. The formation of the Olympos urban texture rises to the Roman Imperial period. Partly prosperous especially in the Late Antiquity and Early Byzantine period, the city began to be abandoned with Arab raids from the middle of the 6th century AD. The city of Olympos was abandoned in the 15th century when the Ottoman Navy was under the domination of the eastern Mediterranean.

The Olympos Stream flowing in the middle of the Olympos, which is located in the deep valley where the steep slopes extending to the shore of the region meet with the Mediterranean, is an important element that gives character to the city. In the antiquity, the river bed dividing the city into two is taken as a channel and both sides are used as piers and connected with the bridge . The bridge stands at a foot and reaches the day-to-day. On the southern shore, the polygonal braided wall of the Hellenistic period and the part of Roman and Byzantine repairs near it are visible. Near the mouth of the river is a small and steep acropolis with building remains from late periods. The southern shore of the river is Hellenistic-based and the Roman theater is very ruined and its entrance is well preserved. Another important structure that can be seen in the city is the river mouth 150 m. west of the city. From the architectural pieces belonging to a small temple in the order of Ion, it was made in the name of the Roman emperor Marcus Aurellius (AD 172-173).

"Captain Eudomus' s sarcophagus" that was excavated in daylight. The sarcophagus, situated on the slope of the rock near the mouth of the river when the plaja goes, is of great importance both in giving the name of the captain in the emotional poetic dedication inscription and in giving the shape of the ship in the relief of the long side.

Olympos Ancient City It is an important port city located in the western part of Antalya in Kumluca District. The distance of the ancient city to Antalya is 87 km and the distance to Kumluca is 28 km. 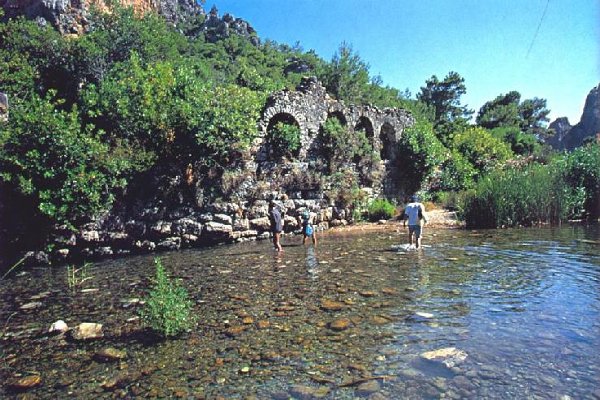 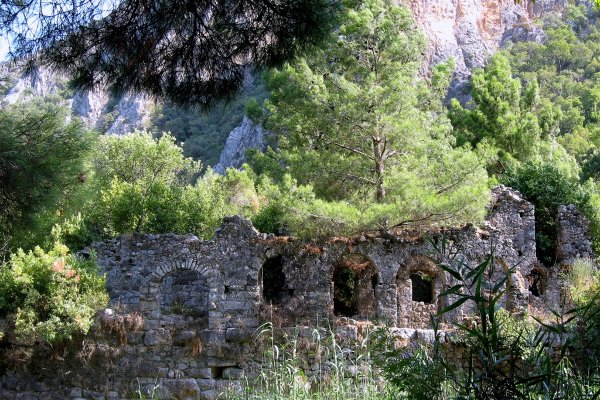