Mihr-i-Mâh Sultan Mosque The mosque located in the Edirnekapı section of Istanbul's Karagümrük district next to the city walls. Mihrimah Sultan is the daughter of Süleyman the Magnificent. Between the years of 1562-1565 was done by Architect Sinan. There are madrasa, school, tomb, baths around the rectangular planed glass. The 37-meter-high dome is leaned against three arches, with two columns next to it, three domes and chambers on the right and left. The altar and minbar were made with stone workmanship.

When the glass entrance of the giant courtyard is reached by a steep staircase into the mosque, there are medreses on the right side and the last congregation place with 8 marble granite columns with 7 domes. The fountain is in the garden among them, the minaret is right. Hammam is on the side of the street. The restoration of the damaged glass was completed in the 1999 earthquake.

It took about 3 years for the Ottoman Empire to build the mosque. 11 years of restoration work has been completed and the mosque has been opened for service.

Mihr-i Mah comes to the meaning of Sun and Moon.

When the daughter of Kanuni Sultan Süleyman Mihrimah Sultan pressed seventeen, two people wanted to marry her. Mihrimah, meaning Mihrü Mah, means "Sun and Moon" in Persian. One of the ones who want to marry a girl is Diyarbakır Governor Rustem Pasha and Mimar Sinan. The Sultan will give his daughter to Rüstem Pasha. Big Sinan is married, and is in love with Mihrimah Sultan like madmen! Though he did not get what he liked, he reflected his love in his art with all his beauty.

Üsküdar, at the request of the Palace, in 1540, the foundation of the Mihrimah Sultan Mosque was established and completed in 1548. While performing the camii, he gives the outline of the work as if "a woman swallows huts." Then, for the first time in Edirnekapı, without a sultan's promise, Mihrimah Sultan is set to make a second work, one of the highest peaks of Istanbul, uninhabited by some people. The mosque is tiny. Minaresi is thirty-eight meters long, with one hundred and sixty windows on one slender dome illuminating the inner beauty of the mosque. The stalactites inside and the works on the sides of the minaret reminiscent of the hair that beat Mihrimah Sultan's heels.

Here, two works dedicated to love. Now, go to Edirnekapı and Üsküdar, select a place where you can see the same glass and watch on March 21st, that is, day is equal to day. Remember, March 21 is the birthday of Mihrimah Sultan. Shadow in the scenes you will see; The only minaret of the Edirnekapı mosque followed by a flashy tray like the tray, the moon after Üsküdar mosque is born! 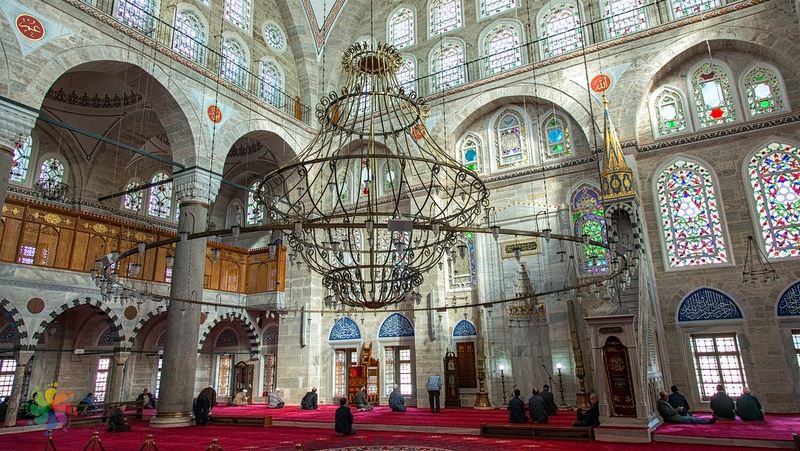