Kusadasi is a district of Turkey's Aydin province. Kusadasi is one of Turkey's first tourism center, tourism dates back to the 1960s, began where the first cruise ship tourism. The number of domestic and foreign tourists, especially in the summer with the local population of around 110 thousand is based on 2 million at times.

Although it is not known exactly when and by whom Kusadasi was founded, it is thought to have been founded by the Ions with the name of Neopolis.

The city was founded on the outskirts of Pilavtepe, in the place called Andızkulesi. Venetian and Genoese people were economically dominant in these coasts which belonged to the Byzantines after a while. Kuşadası due to transportation difficulties; It was founded with the name of New Scaffold (Scala Nuova) at the present site.

Kuşadası Bay, which is named as Kuşadası, is known as the arts and culture centers and has been home to many different civilizations since the early ages.

In 3000 BC, Lelegians, Aiols in 11th century BC, and Ions in 9th century BC were dominant in the region. The area between Büyük Menderes and Gediz rivers is called Ionian in ancient times. Ions that are merchants and sailors have been enriched in a short time thanks to overseas trade and have a superior political power. In history, they have established 12 cities which are called "Ion Colonies".

Kuşadası was one of the major ports of Anatolia that opened to the Mediterranean in ancient times. He was called Neopolis by name. In the 7th century BC, the Lydians, whose capitals were Sardes, dominated the region.

The Persian domination that began in 546 BC continued until 334 BC when Alexander the Great captured Anatolia. In Anatolia, a new era, a new art and culture understanding dominate the Greek civilization and the native Anatolian civilization, and this era is called the "Hellenistic Age". Ephesus, Miletus, Priene and Didim are the most famous cities of this period.

In the 2nd century BC, Romans dominated the region. In the early years of Christianity, Mary and his apostles St. When he came to Ephesus and settled there, he became a religious center. Miletus is an episcopal center in the Christian age. In the Byzantine Age, it is called "Ania". Kuşadası has been a port used by pirates in the Middle Ages. In the 15th century, the Venetians and the Genoese took the name "Scala Nuova".

In 1086, the Turkish sovereignty began when Suleiman Shah took the region to the Seljuk State. In this period, the region has been an export gate to the Aegean. However, the sovereignty of the Seljuk State was short-lived due to the 1st Crusades and was again captured by the Byzantine Empire. By the end of the 1280s, Menteşeoğulları entered the Ottoman Empire under the rule of 1397-1402. Although the period between 1402-1425 was captured by the Aydınoğulları, the Ottomans in 1425 took over the region.

Kuşadası joined the Ottoman Empire in 1413 by 1.Mehmet (Çelebi). After this date, the city was completely in the hands of the Turks and began to be filled with the works of the Turks. Among them, the walls that turn Kervansaray and Kusadasi were built by Mehmet Pasha.

Only three doors could be entered into the city surrounded by walls. One of these gates differentiates Barbaros Hayreddin Paşa Caddesi and Kahramanlar Avenue and the upper part was previously used as the Urban Traffic Regional Authority, but now it is used as the crime scene inspection office. Other doors are not available today.

Küçükada, (Güvercinada) was an important military base for the Byzantines, in 1834 it had undergone a great renewal and its famous castle was built. The name "Kuşadası" comes from this castle. 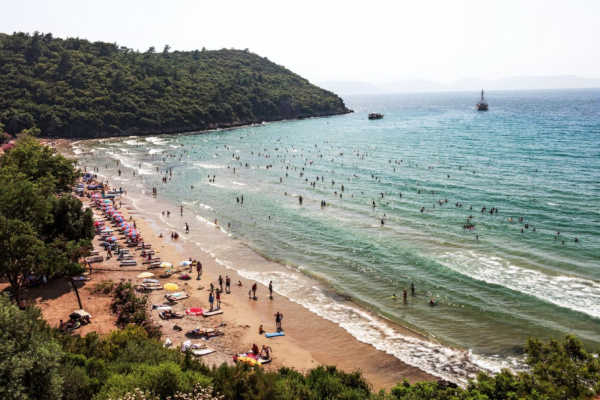