Kuğulu Park(Swan Park) is a park located in the Kavaklıdere district of Ankara. The park is between Tunalı Hilmi Street, Atatürk Boulevard and Poland Street. The park's pool includes swans, geese and ducks.

Kuğulu park where the land, before the park was a pine land passing through the stream. The Kavaklıdere district, which also includes Tunalı Hilmi Street, takes its name from these creek and poplar trees. On the south side of the land were the gardens of the Polish embassy, ​​and the Sevda and Cenap And House built by Cenap And the owner of Kavaklıdere Wines in 1955. The pond left behind from Kavaklıdere and its surrounding land was turned into a park by the Ankara Municipality in 1958.

In 1957 a portion of the territory of the Polish Embassy was taken for the expansion of the Atatürk Boulevard.

The park, which did not attract much attention from the public at first, was a popular place when it was reorganized during the mayor of Vedat Dalokay (1973-77). The name of the park comes from the white swans, which were presented by the City of Vienna during the years it was founded. Three of the swans of the Kuğulu park were later transferred to the Seymenler Park. These swans then died at different times when they flew to Kuğulu Park to fly to high-rise buildings or trees. The black swans (Cygnus atratus) still present in the Park are the gifts of the Chinese government and came from Beijing.

Kuğulu Park is one of the popular parks in Ankara. During the construction of the Kuğulu Underpass, which was opened in 2007 and passed by the park, protests were held in 2006 on the rumors that the park would be lifted. In 2008, it was claimed that the underpass caused drying of some trees in Kuğulu Park.

Today there are 24 different bird species in the park known for its swans, geese and ducks. In addition to poplars in the park, there are various shrub groups with sycamore, redbud and hawthorn trees.

Due to its historical and natural beauty, the Ministry of Culture has been designated as a protected area by the Ankara Cultural and Natural Heritage Protection Board. Adjacent to the park, the And House and its garden are also protected by the decision of the Board of Monuments.

In addition to the 24 different bird species with the swans of the park, there are poplar, lilac, redbud, various bush groups and seasonal flowers in the Kuğulu Park. 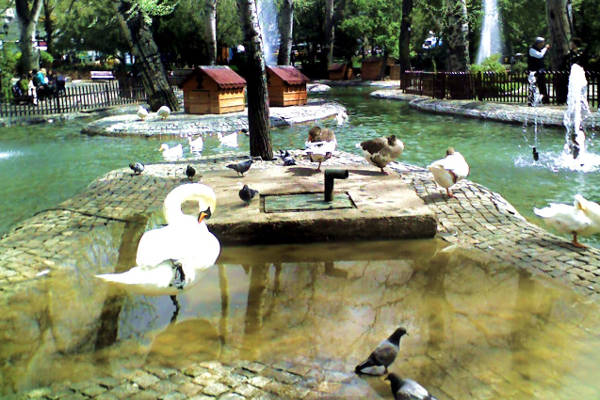