The Tower, known as the Tower of Jesus, was built as a lantern tower in 528 by the Byzantine Emperor Anastasius Oilless. The Galata Tower, which passed through the hands of the Romans, the Venetians, the Genoese and the Ottomans, served many different purposes throughout history.

The tower, which was damaged during the 4th Crusades in 1204, rebuilt the Cenevizller in 1348 using stone. The Galata Tower was raised between the years 445-1446.

The tower was damaged and repaired in the earthquake that occurred in Istanbul in 1509. In the period of Ottoman period, tower bie was used as a period hospital.15. and the tower was used as an observatory in the 18th century. According to the fire tower task in the 18th century, the tower itself was burnt, damaged and repaired. In 1875, a storm flew over the roof. The tower restored in the Republic was taken today.

The tower is 66.9 meters from the ground and 140 meters above sea level. Diameter is 8.95 meters, wall bloody is 3.75 meters. It is estimated that the weight is 10 thousand tons.

If a man and a woman come together for the first time in Galata Tower, they will definitely get married ... But if one of the couples had already been in the tower (not by anyone else or alone), this talisman is broken.

Galata Tower and Maiden Tower are in love with each other. But it is also impossible to meet because of the incompetent throat. Day after day their aspirations are increasing. Then one day, Hezarfen Ahmet Çelebi climbed the tower, flying from Europe to the Anatolian side. Not depending on the insistence of the Galata Tower, it is winged by taking the letters that the mankind has accumulated for centuries and leaving them to the Maiden's Tower when approaching the shore of Salacak. The letters blown by the wind reach the Maiden's Tower with the help of the waves. The Tower of the Girl who understands that love is not free is more beautiful after letters. At this point, Galata Tower understands that love is not one-sided. These emotions, which the couple feels against each other, allow them to challenge each other for centuries ... 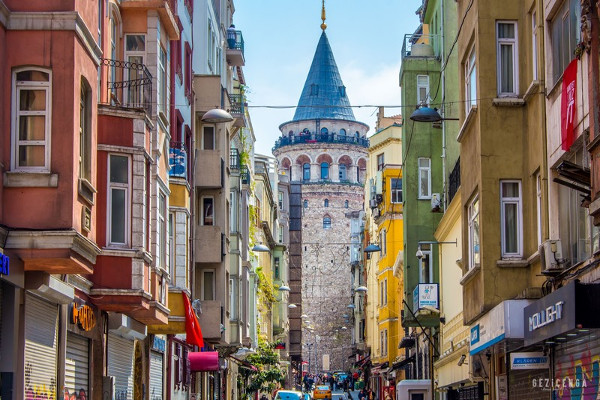