The Dolmabahçe Palace is a palace built on an area of ​​250,000 m², which started in 1843 and finished in 1856. It is located on the left bank of the Sea of ​​Marmara at the entrance of the Bosphorus by sea, opposite Üsküdar and Salacak.

The area where the Dolmabahçe Palace is today is a large bay of the Bosphorus, where the Ottoman Captain-Derya's anchors the ships until four centuries ago. This division, which hosts maritime ceremonies, has become a swamp in time. In the 17th century, the cove filled to get rid of the marsh was transformed into a "hasbahçe" as a place of entertainment and rest for the sultans.

There is no information about the precise date of the destruction of the mansions in the place of the present Dolmabahçe Palace, in order to bring out the land recovered from the sea about 200 years ago. It is estimated that the palace was in place in 1842 and the construction of the new palace was started after this date. Together with this date, it is stated that the fields and cemeteries on the periphery are purchased and expropriated for the expansion of the construction site. Various sources for the date of construction are given different dates. However, we understand that at the end of 1853, a French who visited the palace construction told them that the ornaments of the palace had been made, and that the furniture had not been placed yet.

The palace's front built by Sultan Abdülmecit I extends 600 meters along the European shore of the Bosphorus. It was built between 1843-1855 by Garib Amira Balyan and his son Nigoğos Balyan, a mixture of European architectural styles. The opening ceremony of the Dolmabahçe Palace, which was completely finished in 1855, came after the Paris Treaty with the Russians (30 March 1856). 7 The Ceride-i Havadis dated to Şevval 1272 (11 June 1856), the palace officially opened on 7 June 1856 have been informed

During the reign of Abdulmecit, 3 million purses of the palace were borrowed and this debt was transferred to the Treasury. After this, the finance was in a difficult situation and the salaries fell to the levels that would be paid in 3-4 months. Sultan Abdülmecit could live only 5 years in the Dolmabahçe Palace, which cost 5,000,000 gold.

Abdülmecid Efendi, who received a telegram signed by the Grand National Assembly rector Gazi Mustafa Kemal, was declared caliph and abandoned Dolmabahçe Palace (1924) with Abdülmecit Efendi entourage with the removal of the Caliphate. Iranian Shah Pahlavi, Iraqi King Faisal, Jordanian King Abdullah, Afghan King Amanullah, British King Edward who came for a special visit and King Aleksandr of Yugoslavia were welcomed by Mustafa Kemal Atatürk in Dolmabahçe Palace. The first Turkish History Congress was opened on the 27th September 1932 at the Muayede Salonu, and the First and Second Turkish Language Conventions were held here in 1934. The European meeting of the Alliance Internationale de Tourisme, the world organization of the Turing institutions, was held at the Dolmabahçe Palace and the first opening of the palace was introduced (1930).

During the Republican period, the most important event in the palace which Atatürk used as his residence during his visit to Istanbul was the death of Atatürk on November 10, 1938. Atatürk passed away in the 71st chamber of the palace. The last respect was passed from the front of the catafalga konan nasası established in the Muayede Salonu. The palace was used by İsmet İnönü during his presidency after Atatürk and during his arrival in Istanbul. After the single party period, the palace was opened to serve foreign guests. German President Gronchi, Iraqi Faysal, Indonesian Prime Minister Sukarno, Prime Minister of France General de Gaulle ceremonies and banquets were given to the honor.

In 1952, the Dolmabahçe Palace was opened to the public one day a week in the National Assembly Administration. On July 10, 1964, a public opening ceremony was held at the meeting of the National Assembly Presidency and was closed down on 14 January 1971, in the words of a notice by the National Assembly Administration. Dolmabahçe Palace, which was opened on 25 June 1979 by order of the President of the Parliament numbered 554, was closed again on 12 October of the same year. About two months later, he started to serve again with the phone order of the President of the Parliament. With the decision of the MGK Executive Branch dated 16 June 1981 and numbered 1.473, the palace was closed again to the visitors and a month later it was opened with the order of the General Secretariat of the MGK numbered 1.750.

Departments providing cafeteria services and cafeteria services departments for visitors are set up in the gardens of Clock Tower, Furnishings Department, Kuşluk, Harem and Veliahd Districts. Books prepared in this section by the Culture-Promotion Center and exhibiting scientific features of national palaces, various postcards and National Palaces Table Collection Just like the products selected from the sale are offered for sale. On the other hand, the Muayede Hall and the gardens are divided into national and international receptions, new arrangements have been made to the palace, museum units in the museum, arts and cultural events. The palace has been serving as a museum since 1984.

The Dolmabahçe Palace istanbul turkey, history, photograph,information about, where? map, how can i go? places to visit, places to go. historical places, old buildings. Museum in ornate ottoman sultan's palace 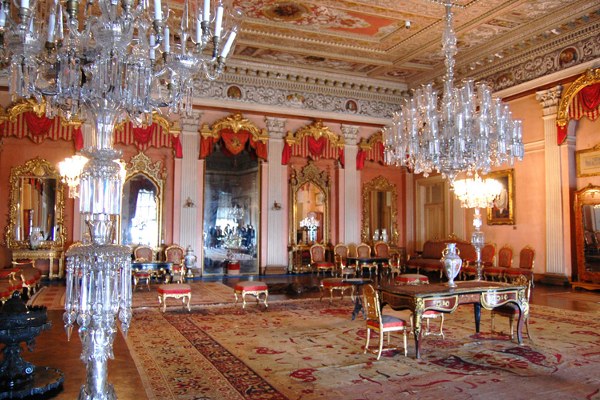