Muğla, one of the oldest settlements of ancient Caria region, has been under the rule of Hellenistic colonization movement in Egypt, Assyrian and Scythian occupations in partial and short periods, and later in the coasts, especially in the history of Anatolia. First the Medes and then the Persians took Muğla under their administration and they managed the region through a satrap. When Alexander the Great came with his armies, the Muğla region was governed by a Karya satrap.

Theses claiming that the name 'Caria' originates from a commander named 'Snow' who led the tribes to the region in 3400 BC. The region was referred to as Caria throughout the ages and the Karya region, which began at the north by Söke, Aydın, Nazilli and ending in the south by the Dalaman River, was adjacent to the Lydians in the north and Lycians in the south and Phrygians in the south.

The tribes have penetrated the Carian region in a very long period starting from the coast. Knidos (tip of the Datça peninsula) and Halicarnassus (Bodrum) with the beginning of the Dillala (Dalaman), Stratonikea (Yatagan Eskihisar), Nakrasa (Karakuyu), Akassos (Bozuyuk) and Fethiye around Telmessos, Xantos (Kınık), Patara ( Minare) and Tlos (Eşen) cities were established.

When Alexander the Great came to Caria in 334 BC, he encountered an inter-brotherhood reign which emerged with the withdrawal of the Persians. Ada's sister and brother and husband Hidrieus and Mausolus and sister and wife Artemisia faced the rebellion of the other brother, Piksodaros, and were therefore taken to Alinda (Watermelon) to the north. Ada sent Alinda's keys to Alexander the Great and asked him to accept him as his mother. Alexander accepted this request and brought the island to the satrapy of Karia. However, the following year when Alexander passed to Lycia, his sister, Piksodaros, succeeded by killing satrap Ada. The assignment of Saturna, the treasurer of Alexander, to Satrap, also did not provide the law, and after Alexander had moved away, the region fell into a period of anarchy which lasted until nearly two centuries (Pergamum and Roman rule). When the Roman Empire was divided into two in 395 Caria remained within the Byzantine Empire.

Muğla province is rich in historical ruins and has 103 ruins in its borders. 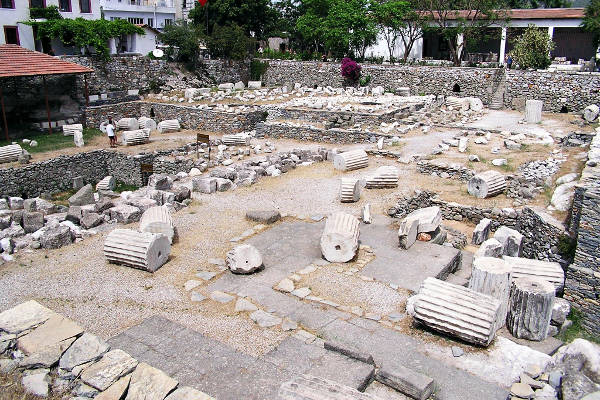