The Alaeddin Mosque was built on the mound named Alaeddin Hill in Konya as the great mosque of the city during the Anatolian Seljuk period.

It is the largest and oldest mosque in Konya. Its construction took place in two stages: the first stage began during the reign of Masud I and replaced him after his death. It ended with the construction of a tomb in the courtyard of the mosque Kılıçarslan. About 26 years later, Izzeddin Keykavus I began to expand the structure; construction was completed in the first years of the reign of Alaeddin Keykubad.

II. The tomb built by Kılıçarslan in the courtyard of the mosque was the tomb of the Seljuk dynasty. The second tomb, which was built by Izzeddin Keykavus I, remained unfinished.
Architectural features

It has a rectangular plan extending in the east-west direction. In one of the inscriptions, the mosque architect Mehmed b. Havlan, Atabeg Ayaz is stated to be the trustee.

There are four gates, one on the east and the other on the north. Today, the door on the east side is used.

Pulpit from ebony wood is a very valuable work of Turkish art. It is understood from the master's inscription that the pulpit was built by Hacı Mengüm Berti in 1155.

It is understood from the fragments in the dome of Maksûre and the mihrab that there are ceramic ornaments in the Alaeddin Mosque. Colors used in mihrab. The eggplant purple used in Anatolian Seljuk tiles is turquoise and black. Kerimüddin Erdişah is the master on tile material.

The minaret of the mosque was built during the Ottoman period and is located in the courtyard.

Alaeddin Mosque, II. After the repair and some changes made by Abdulhamid, 1914-1918, 1920-1923 and 1940-1945 was allocated to military affairs during the war was closed. After very dangerous cracks appeared on the walls in 1958, they were closed and repaired again.
Tombs of the Seljuk Sultan

The second tomb in the courtyard is an incomplete octagonal plan. There's no coffer in it. Although it was built for one of the Seljuk sultans, it is not known for whom it was built. 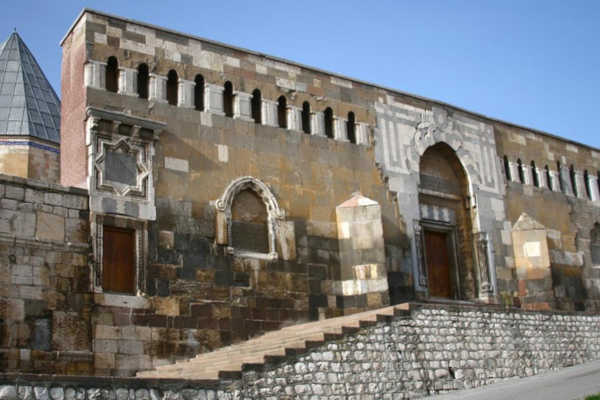